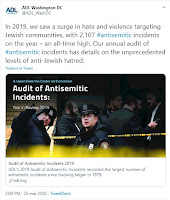 "American Jewish community experienced the highest level of antisemitic incidents last year since tracking began in 1979, with more than 2,100 acts of assault, vandalism and harassment reported across the United States, according to new data from ADL (the Anti-Defamation League). The record number of incidents came as the Jewish community grappled with vicious and lethal antisemitic attacks against communities in Poway, Jersey City and Monsey, and a spree of violent assaults in Brooklyn". 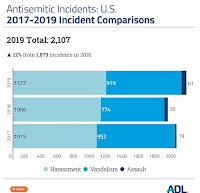 "The year included five fatalities directly linked to antisemitic violence and another 91 individuals targeted in physical assaults. Incidents were reported in every one of the 48 contiguous United States and Washington, D.C. More than half of the assaults nationwide took place in the five boroughs of New York City, including 25 in Brooklyn alone." 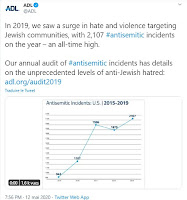 “This was a year of unprecedented antisemitic activity, a time when many Jewish communities across the country had direct encounters with hate,” said Jonathan A. Greenblatt, ADL CEO. “This contributed to a rising climate of anxiety and fear in our communities. We are committed to fighting back against this rising tide of hate and will double down on our work with elected leaders, schools, and communities to end the cycle of hatred.”

ADL’s Center on Extremism identified 234 incidents targeting Jewish synagogues and community centers in 2019. This included the white supremacist shooting at a Chabad center in Poway, California, which killed one worshipper, a 60-year-old woman who was mourning her mother’s recent death, and injuring three more, including the rabbi. 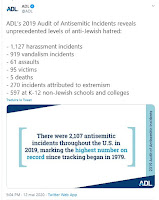 "ADL’s Audit classifies all incidents into three categories: assault, harassment and vandalism. Of the total incidents reported in 2019:"

- "Harassment: There were 1,127 harassment incidents, cases where one or more Jews reported feeling harassed by the antisemitic language or actions. Acts of harassment increased by 6 percent from 1,066 in 2018."

- "Vandalism: There were 919 vandalism incidents, cases where property was damaged in a manner which that harmed or intimidated Jews. Swastikas, which are generally interpreted as symbols of antisemitic hatred, were present in 746 of these incidents. Acts of antisemitic vandalism increased 19 percent from 774 in 2018." 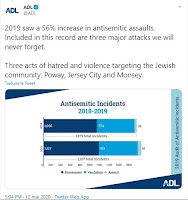 "There were incidents reported in every state, except Alaska and Hawaii. The states with the highest numbers of incidents were New York: 430, New Jersey: 345, California: 330, Massachusetts: 114 and Pennsylvania: 109. Combined, these states account for nearly 45 percent of the total number of incidents."

"ADL’s Center on Extremism has gathered the complete 2019 data, as well as data from the previous two years, on ADL’s H.E.A.T. Map, an interactive online tool that allows users to geographically chart antisemitic incidents and events nationally and regionally."

“It’s clear we must remain vigilant in working to counter the threat of violent antisemitism and denounce it in all forms, wherever the source and regardless of the political affiliation of its proponents,” said Mr. Greenblatt. “We need to ensure that synagogues and community centers have the right security measures in place to prevent the next potential attack. We plan to work with members of Congress and other elected officials this year to ensure that funding is in place and that all states mandate Holocaust education, which can serve as an effective deterrent for future acts of hate.”

"In 2019, ADL recorded 270 antisemitic incidents attributed to known extremist groups or individuals inspired by extremist ideology. This represents 13 percent of the total number of incidents." 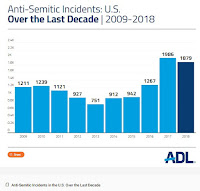 "At least 170 antisemitic incidents in 2019 referenced Israel or Zionism. Of those, 68 took the form of white supremacist groups’ propaganda efforts, which attempt to foment anti-Israel and antisemitic beliefs. Most of the remaining incidents were expressions of anti-Israel animus that incorporated antisemitic imagery or harassment and demonization of Jewish students for their real or assumed connection to Israel."

"The Audit offers a snapshot of one of the ways American Jews encounter antisemitism, but a full understanding of antisemitism in the U.S. requires other forms of analysis as well, including but not limited to, public opinion polling, assessments of online anti-Semitism, and examinations of extremist activity, all of which ADL offers in other reports, such as ADL Global 100, Quantifying Hate: A Year of Anti-Semitism on Twitter, Online Hate and Harassment: The American Experience, Murder and Extremism in the United States in 2019, and the ADL Survey of American Attitudes Toward Jews."

How ADL is Responding
"ADL has a comprehensive approach to addressing antisemitic incidents and behavior, including educating youth to prevent these incidents and working with law enforcement to apprehend the perpetrators. ADL works to enact laws to improve federal, state, and local prevention tactics and response to antisemitic hate crimes and all forms of hate violence."

"ADL partners with law enforcement to raise awareness of extremist threats and trains law enforcement professionals to recognize and disrupt potential threats. ADL likewise provides education and training every day to students, reaching young people at a time when they are most vulnerable to bullying and social pressures. ADL also works with victims and universities to respond to antisemitic harassment and other worrying incidents on college campuses. Finally, ADL’s No Place for Hate and Words to Action programs teach understanding and promote inclusivity in schools and on campuses, respectively."

"In response to the historic rise in antisemitic incidents over the past four years, ADL has made the following policy recommendations:
- "Nationwide, public officials and civic leaders should use their bully pulpits to speak out against antisemitism and all forms of hate and extremism."
- "Congress should hold additional hearings on the increase in hate crimes, the rise of extremist groups and proliferation of their propaganda, and support legislation, including the Domestic Terrorism Prevention Act, that calls on the federal government to improve coordinated responses and collect data on domestic terrorism."
- "Congress should increase funding for non-profit security grants for synagogues and other houses of worship, schools, and community centers."
- "Policymakers must support efforts to provide law enforcement officials with the tools and training they need to prevent and effectively respond to hate crimes. Federal, state and local law enforcement agencies should also improve their procedures for responding to and reporting hate crimes. Congress should approve the pending Jabara-Heyer NO HATE Act and fully fund Section 4704 of the Matthew Shepard and James Byrd, Jr. Hate Crimes Prevention Act for “technical, forensic, prosecutorial, or any other form of assistance” to state and local law enforcement authorities for investigating and prosecuting hate crimes."
- "School districts should promote anti-bias, bullying prevention, and Holocaust education programs in elementary and secondary schools. University leadership should respond firmly and forcefully to antisemitic acts on college campuses, including incidents that target Jewish students because of their actual or perceived support of the state of Israel. Congress, the U.S. Department of Education, state legislators and mayors should increase funding to promote an inclusive school climate and for anti-bias education, Holocaust and genocide education, and hate crime prevention."
"The ADL Audit includes both criminal and non-criminal acts of harassment and intimidation, including distribution of hate propaganda, threats and slurs. Compiled using information provided by victims, law enforcement and community leaders, and evaluated by ADL’s professional staff, the Audit provides a regular snapshot of one specific aspect of a nationwide problem while identifying possible trends or changes in the types of activity reported. This information assists ADL in developing and enhancing its programs to counter and prevent the spread of antisemitism and other forms of bigotry."